First, Otter-Pop led me to the mysterious black hole that consumed her favorite toy, and proceeded to stick her nose as deep as she could wedge it into the dark void. She sniffed and smelled inside that wall, but alas, she couldn’t rescue her beloved friend. Once she had resigned herself to the fact that human assistance was most certainly required, she just sat down and did a spaghetti-western-stare-down between me and that damn hole in the wall. (Visualize the final shoot-out scene from the 1966 movie ‘The Good, The Bad & The Ugly’)

Now, I certainly know better than to put my bare hand into an old, dark heater duct in a house that was built in the 1920s. Black Widow spiders? Mice? Snakes? Perhaps the illusive chupacabra? Who knows, maybe even a good old-fashioned rat’s nest. Yuck! Nope, I’m not doing it…!!! 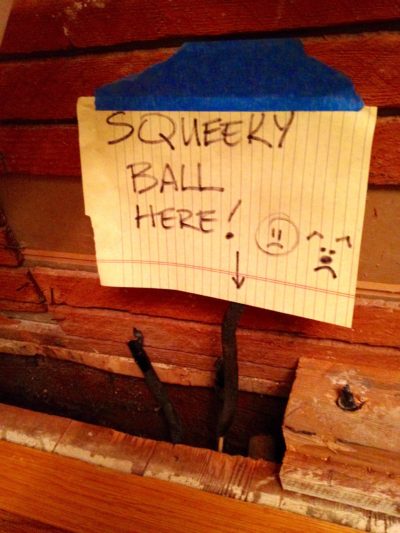 So, I opt for the next best choice, I snapped the photo above and sent it to the contractor. Being a good dog-lover, he called me immediately, laughing so hard he couldn’t make words for almost 30-seconds. Oh yes my dear, this is hysterical, no really…

While awaiting words from the contractor, Otter-Pop ratcheted things up a bit by fixing an intensely desperate stare on me. It was at that point I came to fully understand just how anxiety ridden she had become about the predicament of her best toy. Sadly, the contractor wasn’t going to be in the area for another week to 10-days and I just knew we weren’t going to get any peace until that toy was recovered…

Foolishly, I attempted to ignore the obvious, but after two days of Otter-Pop pacing the floor surrounding the hole while whistling through her nose in distress, and two long nights of very little sleep, I surrendered and started drafting a plan to extricate the prisoner from the hole.

I decided eye protection was a good idea, just in case something other than the ball arose from the abyss. I then moved on to a plan to protect my arm from damage by wrapping it with a black plastic construction bag and duct tape all the way up to my shoulder. Honestly, the strangest part about all of this was that I felt as though I was preparing to perform heart surgery, rather than a simple toy extraction.

Under Otter-Pop’s watchful eye, I laid down on the floor and stuck my shiny, black, plastic arm deep into the hole in the wall. Otter-Pop’s pacing and anxiousness were palpable, as I felt around the unseen space below the floor. All of the sudden I felt something and decided to go-for-broke and rip it out of the abandoned venting. Holy cow! As my plastic arm arose from the hole, in my palm was one very dusty, dirty, tired little yellow squeaky-ball!

Otter-Pop was so excited she didn’t even wait until I cleaned 90-years of dust-bunnies off her ball. Rather, she just grabbed it out of my plastic covered hand as if it was a whimpering puppy in distress, brought it to her bed, and began a thorough sponge bath of her long-lost friend. Honestly, it was touching to see how carefully she cleaned every inch of that cute little ball. 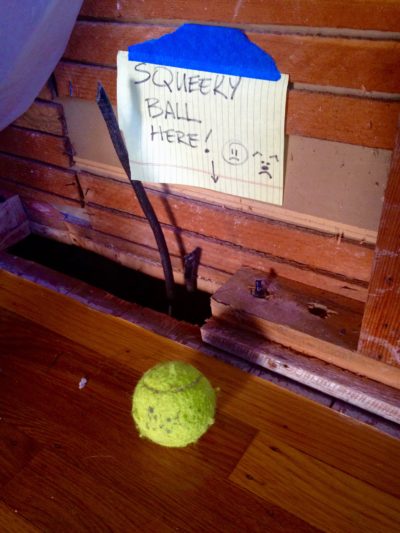 After I sent the contractor the photo above, I decided to cover that damn hole until the sheet rock could be replaced, never wanting to put poor Otter-pop through such an ordeal again. 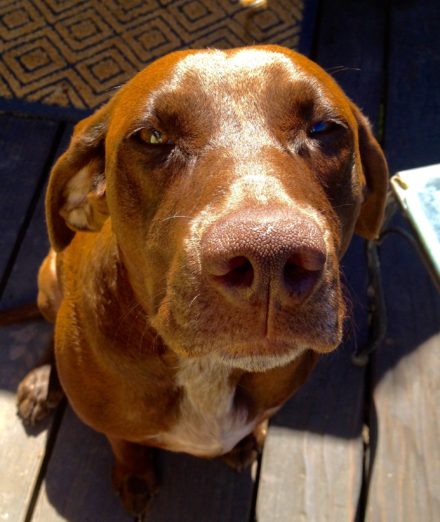